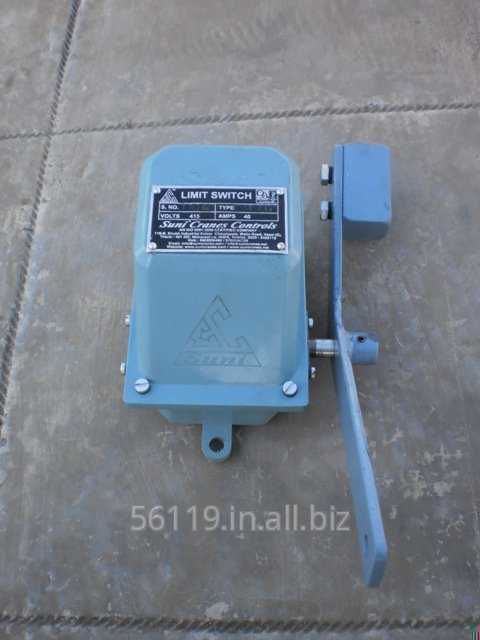 We stand as the most preeminent Limit Switch Manufacturer and one of the supreme Suppliers of the same. Gravity type Suni makes Limit Switches are used on Control / Power circuit of reversing drives so as to limit their rotation / movement within a predetermined position.
The function of the Gravity type Suni make Limit Switch is to stop the mechanism of drive at the extreme top position of the snatch block in a Crane.
The contacts of our Gravity Limit Switch are rated for 40 amps at 500 Volts A.C. , 50 C/S Continuous
The Crane Limit Switch can be provided with 2 NC contact s or (1No + 1NC) contacts as per the requirement.
This limit switch is some what similar in construction to a Lever Limit Switch except for the Lever. In this case one side of the Lever has a weight and from the other side a plate is hung which eventually operates when the snatch block reaches its top position.
The lever Limit switch operates in the following manner
When the Snatch Block of the Crane reaches its top position the Snatch Block pushes a Plate which is hanging from one end of the Lever of the Limit Switch. Due to the weight placed on the other end of the lever this lever is pushed up.When the lever is pushed up the shaft to which this lever is connected rotates there by rotating the cams which eventually open the contacts and disconnect the motor
The Limit Switch contacts are automatically reset when the lever returns to zero position due to Gravitational force.
1 or 2 cams are used depending upon whether the Gravity Limit Switch is of 1 contact or 2 contacts operation.
The cam shaft on which the cams are fitted is mounted in the housing on moulded bushes of synthetic material which are fixed to the front and rear walls by means of screws.
The Cams which are fitted on the cam shaft are moulded from the highest quality synthetic material and are accurately cut to correspond to the switching sequence desired.
The contacts have a maximum continuous Current capacity of 40 amps AC.
The contact tips are made of high grade Silver Cadmium Oxide alloy.
When used for Series operation [up to 40 Amps maximum], the Contacts are suitable for 720 operations per hour and in case of Shunt operation [for Control Circuit], the Contacts are suitable for 1000 operation per hour.
The same Contacts can be used in Series as well as in Shunt configurations
The switching capacity of the Contacts when used for Shunt operation is 15 amps at 400 Volts, AC on highly inductive load and 2.5 amps at 220 Volts DC.
These switching capacities in fact are far in excess of what is actually required in practice and hence replacement of Contacts for Shunt may not be necessary for a long time.
The body of the Contacts is made of high grade Melamine which is specifically suited for heavy duty operation .The material is non tracking and is capable of with standing heavy arcing.