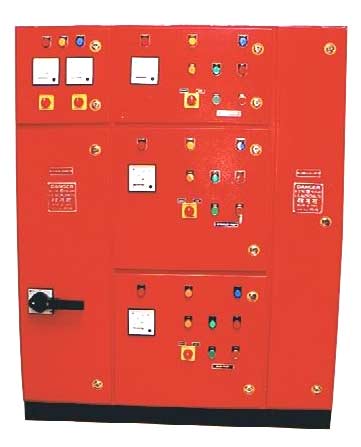 In stock
Reconfirm the price with seller
Seller
M/S Sun Fire Engineers, Company
India, Mumbai
(View map)
+91(
Display phones
Call
Products of other enterprises
Description
We are the leading Manufacturer and Supplier of efficient Fire Alarm Control Panel. The Fire Alarm Control Panel is the Central Monitoring Station where all signals are received and transmitted. It is important that the person responsible for taking action, should know exactly where and what the problem is, as soon as he receives a signal from the panel, given below are the details of how to interpret the various lights and switches on the panel fascia.

How to read panel
When the system is switched on and everything is in normal condition, the Green Led indication "SYSTEM ON" will light up on control fascia, rest all the lights on the fascia will be in 'off' position.

In case of fire
In any particular zone, the signal is received by the control panel, either automatically (by Detector) or manually (by breaking the glass at call points), this signal is then translated as an AUDIO/VISUAL Alarm by the panel. The two RED Leds (FIRE) of the particular zone will light up with common fire flashing lamp and an intermittent buzzer in the panel activated, which is known as PANEL ACOUSTIC ALARM (PAA).

After the alarm has been registered, the PAA can be silenced by pressing the "ACCEPT" push button momentarily. However the visual indication (2 RED Led's) will remain on and common file lamp in flashings state. After identifying the zone on fire, the fire Marshall can take necessary preventive action to contain the fire.

Once the fire has been extinguished and the situation is normal, the system can be reset to its normal position by pressing "RESET" push button momentarily. However, in an automatic detection system, if the heat or smoke is still present, the alarm will be reactivated and can be reset only after the cause for the alarm i.e. smoke of heat is removed completely.

In case the fire spreads to another zone, the PAA reactivates and the lights of the affected zones light up. This is due to the repetitive alarm facility provided in the panel. In case of manual system, the smashed glass in the call point has to be replaced before pressing the "RESET" push button.

Line monitoring
The Detector /Manual call points line of each zone is monitored against open or SHORT Circuit. In either case, the respective fault E.D. on the zone fascia of the corresponding zone light up, thereby pin pointing the nature & area of the fault immediately. The panel hooter also will get activated giving continuous sound & can be silenced by pressing the "ACCEPT" push button momentarily however, the fault LED will remain on until the fault is removed.