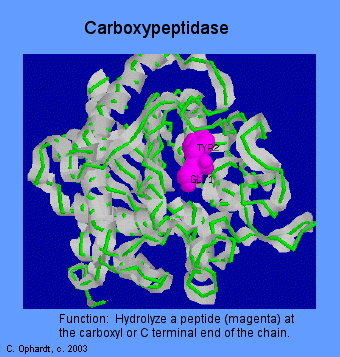 
A living system controls its activity through enzymes. An enzyme is a protein molecule that is a biological catalyst with three characteristics. First, the basic function of an enzyme is to increase the rate of a reaction. Most cellular reactions occur about a million times faster than they would in the absence of an enzyme. Second, most enzymes act specifically with only one reactant (called a substrate) to produce products. The third and most remarkable characteristic is that enzymes are regulated from a state of low activity to high activity and vice versa. Gradually, you will appreciate that the individuality of a living cell is due in large part to the unique set of some 3,000 enzymes that it is genetically programmed to produce. If even one enzyme is missing or defective, the results can be disastrous.

Much of the information about enzymes has been made possible because they can be isolated from cells and made to work in a test tube environment. Extensive work has also been done with X-Ray diffraction techniques to elucidate the three-dimensional structure of some enzymes.

The ribbon and backbone form of carboxypeptidase is shown on the left. The substrate is shown in magenta.

We recommend to see
Enzymes
Send inquiry
Buy
Contact supplier
Your question has been sent successfully
Consultants of the shop typically answer questions during the day.