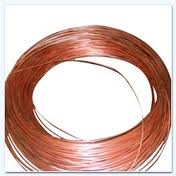 In stock
Reconfirm the price with seller
Seller
Shiv Shakti Metal Industries
India, Mumbai
(View map)
+91(
Display phones
Call
Products of other enterprises
Description
An electromagnetic coil (or simply a "coil") is formed when a conductor (usually an insulated solid copper wire) is wound around a core or form to create an inductor or electromagnet. One loop of wire is usually referred to as a turn, and a coil consists of one or more turns. For use in an electronic circuit, electrical connection terminals called taps are often connected to a coil. Coils are often coated with varnish and/or wrapped with insulating tape to provide additional insulation and secure them in place. A completed coil assembly with taps etc. is often called a winding. A transformer is an electromagnetic device that has a primary winding and a secondary winding that transfers energy from one electrical circuit to another by magnetic coupling without moving parts. The term tickler coil usually refers to a third coil placed in relation to a primary coil and secondary coil. A coil tap is a wiring feature found on some electrical transformers, inductors and coil pickups, all of which are sets of wire coils.
Contact the seller
Copper coil